The winners of the second Manchester Fiction Prize were announced at a gala ceremony on Friday 14th October 2011.

Krishan Coupland from Southampton and Richard Hirst from Preston were the joint winners of the £10,000 first prize, announced at the event which took place at Chetham's School of Music as part of the 2011 Manchester Literature Festival.

This year's competition was for short stories and judged by distinguished writers John Burnside, Alison MacLeod and Nicholas Royle.

Chair of judges Royle, who is also Senior Lecturer in the Manchester Writing School at MMU, said: "With almost 1,900 entries from across the globe, it's been very hard work short–listing just eight but the process has also been a real pleasure – particularly working with John and Alison. We were thrilled with the overall variety and quality of the writing – so much so that we asked to extend the short–list from six to eight this year, and we also have another 30 stories that we'll be commending as close contenders. We were unanimous, though, in selecting our finalists and in choosing the winner – and look forward to meeting the writers and awarding the prize at what should be a very exciting event."

The winners will be announced at a gala prize–giving at Chetham's School of Music in the centre of Manchester on the evening of Friday 14th October. This event forms part of the 2011 Manchester Literature Festival, and will feature readings from all three judges and each of the short-listed stories before the £10,000 prize is awarded.

The winner of the 2011 Manchester Writing Competition Fiction Prize were revealed at the Manchester Literature Festival ceremony. To view all the photos click the left and right arrows on the photo below or view the album on Flickr. 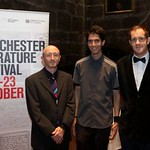