James Draper, manager of the Manchester Writing School,who organise the competition, said: “Both judging panels were impressed by the overall quality of the submissions and worked really hard over the summer, reading through them all, to pull together two short-lists that showcase a thrillingly diverse range of voices and subjects.

“Hearing brief extracts from them all on the night was tantalising – talking to audience members who wanted to get home to read the pieces in full on the website was a testament to both the excellent job the judges had done in selecting their finalists, but also the quality of the writing showcased on the night.”

Chair of the poetry judges Adam O’Riordan, Lecturer in Poetry Writing at Manchester Metropolitan University, said that he and his fellow judges Bernard O’Donoghue and Fiona Sampson “agreed that our shortlisted poets displayed real character and all-round control. We are excited by how much they differ from each other.

“Choosing the winner was a happily unanimous decision. Our winner was chosen because of the un-reproducible bite of the images, their brilliant understanding of human psycho-drama, the sustained accomplishment of their metaphorical imagination.”

Pascale Petit won for a portfolio of five poems from her forthcoming collection Fauverie, and said: “Thank you very much to the judges. I feel really encouraged.”

Destined to become a classic

MMU Lecturer in Creative Writing Nicholas Royle, who chaired the fiction judging panel, said: “We, all three of us, loved all of the stories on the shortlist and any one of them could have won. But in the end our discussions narrowed it down to two and, even then, I think we all felt, deep down, that we knew which one going to win.

“Our winner, we feel, is destined to become a classic. As everybody knows, you can’t have such a thing as an instant classic. Classic status is conferred over time and we have no doubt the winning story tonight will one day have earned that status.”

Winner Adam Wilmington, who is from Wigan, thanked his family for nurturing and inspiring him.

The quality of entrants for the fiction prize was so high this year that the judges chose to highly commend several stories which did not make the final six.

The winners of the 2013 Manchester Writing Competition Poetry and Fiction Prizes were revealed at the Manchester Literature Festival ceremony. To view all the photos click the left and right arrows on the photo below or view the album on Flickr. 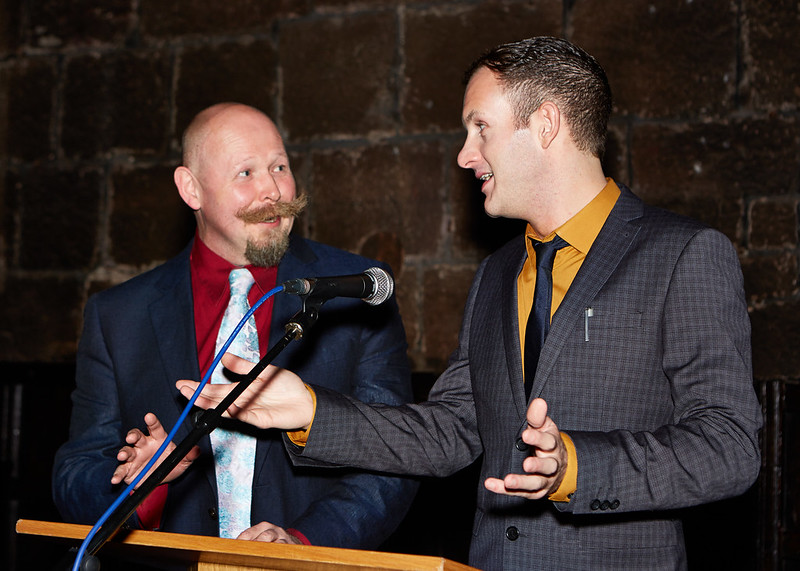