Winner of the Poetry Prize 2014

The Poetry judges - Adam Horovitz, Clare Pollard and chair Adam O'Riordan - couldn't choose between their top two poets, so decided to split their £10,000 prize, awarding £5,000 to UK poet Mona Arshi and £5,000 to Michael Derrick Hudson from Indiana, USA. Mona was at the ceremony to read from her own short-listed collection and collect her golden envelope. She said, "“I’m really overwhelmed, I am just really grateful that the three judges liked the poems enough and what is really great is that it is a really special competition because you don’t just send in one poem – I sent in five poems. It gives you a real range and opportunity to show them a cross-section of your work and they liked it enough and that has given me such a boost to my confidence.”

Michael couldn't be there in person (his poems were read by Adam Horovitz) but sent a message: "It might be reasonable to suggest that almost all poets crave affirmation.  By affirmation I only mean the evidence that somebody, somewhere is actually reading your poems and that the effort put into trying to make poems is not an altogether futile one. To make the short list for the Manchester Poetry Prize was an enormous affirmation. To win the Prize surpasses even the most unrealistic hopes I've ever had for my work.  To misappropriate a famous last line by Rilke, I do believe this has changed my life.I want to thank Poet Laureate Carol Ann Duffy, not only for establishing this wonderful prize, but also for making it international in scope so that a Yank from Indiana had an opportunity to participate."

The runners up were illiustrator Guy Carter, Scotland-based Welsh teacher Wayne Price, poet Lesley Saunders - who won the Prize in 2008, and writer and lecturer Tracey Slaughter from New Zealand.

Winner of the Fiction Prize 2014

The Fiction panel - Christopher Burns, Claire Dean and chair Nicholas Royle - awarded their £10,000 to Martin MacInnes from Inverness, Scotland. Martin was there to read from his winning story and accept the prize. "I'm astonished and humbled to have won, especially so given the outstanding quality of the stories shortlisted and highly commended. I'm struggling to accommodate it - this is the biggest moment of my life, extraordinary validation of my obsessions. I've worked part-time on near minimum wage for seven years, solely to give reasonable time and space to writing, and to reading. I've struggled, badly at times, but persisted, because writing is the one thing I want to do, the most important thing I can imagine. Thank you so much to Carol Ann Duffy James Draper, Matthew Frost, the volunteers at the prize ceremony and all at the Manchester School of Writing and at the Manchester Literature Festival, and of course to Nicholas Royle, Claire Dean, and Christopher Burns for the trust they have placed in me. Thanks as well for the support and encouragement I've received from the Scottish Book Trust, Alan Gillis, Christopher Potter, Jess Whalen, Runar Dahle and Richard Strachan, who has helped with my writing more than anyone else. I feel a very positive pressure now to write ferociously, to push the work as far as it can go. I am enormously grateful for the opportunity."

The winners of the 2014 Manchester Writing Competition Poetry and Fiction Prizes were revealed at the Manchester Literature Festival ceremony, Chetham's School of Music on Friday 17th October 2014. To view all the photos click the left and right arrows on the photo below or view the album on Flickr. 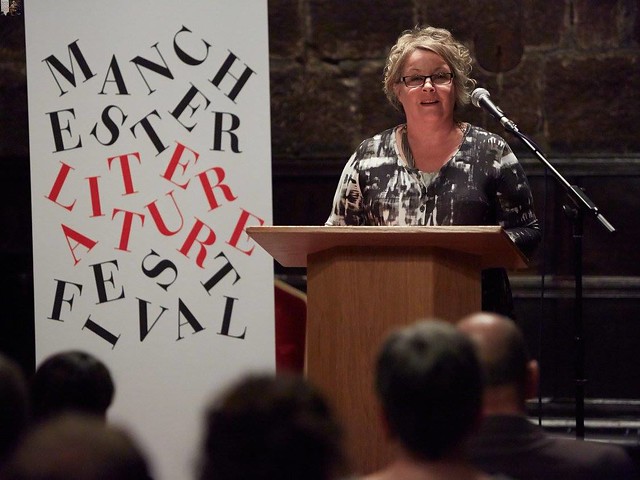