Watch our video from the 2016 Prize-Giving Ceremony

D. W. Wilson submitted the short story All This Concrete Beneath Your Feet. (A man and his young son drive down the Alaskan Highway. Motels, diners and Mounties. What are they running from and where will they end up?)

He said: "I'd like to thank the judges, The Manchester Writing School, all the overworked readers, and, of course, everyone who loves the short story form. Writing is a solitary act, and rarely can writers know if what we're doing is worthwhile, so prizes like these are especially important.

“They give validation, they give reassurance: yes, they say, you're doing something right. Keep going."

He said: "I would like to express my gratitude and appreciation to Dame Carol Ann Duffy and to the faculty and staff of The Manchester Writing School for initiating and maintaining a literary award series such as this one. Thank you, as well, to James Draper for his administrative acumen and for his warm and professional correspondences regarding the awards process. Thank you, especially, to the judges, Adam O’ Riordan, Sarah Howe, and Helen Mort, for the careful attention they spent sifting through thousands of poems, and for the affinities of taste and of experience that drew them to my work. Finally, thanks to my fellow shortlisted poets for the excellent poetry they put into conversation with my own: Eric Berlin, Sakinah Hofler, Rebecca Tamás, Ruth Tang, and Eoghan Walls. I extend to you, all, my brotherhood and best wishes from across the Atlantic in the hard-fought duende and earned communion of poetry.”

She said: "I want to say thank you to all of the judges as this means so much to me, especially because Helen (Mort) and Sarah (Howe) are on the judging panel as they shaped my own writing. For them to pick me means so much. The shortlist itself meant a lot so to win is incredible. The win will allow me extra time to do what I love most and write, which is something that brings me joy. I am overwhelmed and I want to thank Manchester Metropolitan University for the opportunity, which I'm so lucky to have. In the future I hope to lecture."

Fiction prize judge Juliette Pickering said: "The winner of the award was a story I just couldn't forget. It was extraordinary and deep with emotion without over labouring the point. It is difficult for short stories to be seen by the publishing industry, which I know as I work in it, so the competition is an incredible way to celebrate short stories. Being shortlisted for the award provides real validation to their writing and hopefully it will encourage them to continue writing."

Poetry judge Helen Mort said the 2016 Manchester Poetry prize was split because both authors were very strong and had completely different voices.

She added: "We had such a high standard this year and some very varied submissions. The judges had a difficult time deciding the shortlist and the winners and we spent a lot of time discussing he shortlist and reading the poems out loud. I really admired the two writers and their different styles so we decided to share the prize to recognise both of their achievements."

Helen, previous winner of a prize for young writers at the Manchester Writing Competition, added: "Winning the competition is a very big deal, it definitely was for me. It is a very prestigious prize and it boosts your confidence and gives you a sense of where you are going with your writing."

The winners of this year’s £10,000 Manchester Poetry and Fiction Prizes were revealed at a gala ceremony in the medieval Baronial Hall at Chetham's Library in Manchester city centre.

The 2016 Fiction Prize was judged by Nicholas Royle, Janice Galloway and Juliet Pickering and the Poetry Prize by Adam O'Riordan, Sarah Howe and Helen Mort.

The winners of the 2016 Manchester Writing Competition Poetry and Fiction Prizes were revealed at the gala prize-giving ceremony at medieval Baronial Hall at Chetham's Library in Manchester city centre on Friday 25th November 2016. To view all the photos click the left and right arrows on the photo or view the album on Flickr. 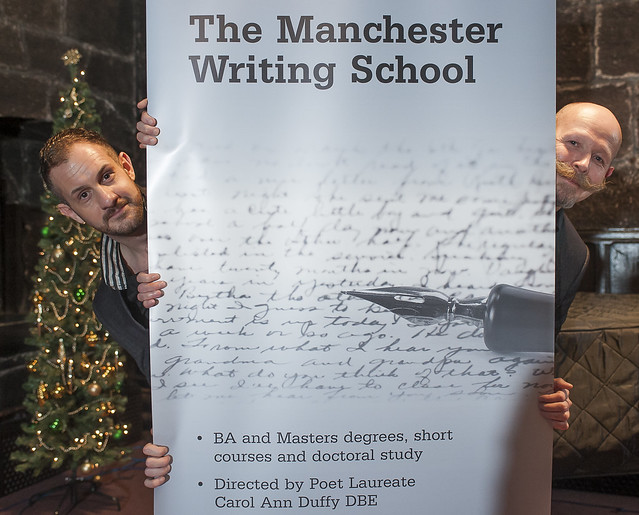 Nicholas Royle says that the Fiction Prize judges, "read stories about abusive uncles and misogynist magicians; stories of regret, revenge and retribution; narratives set in ancient times and missives from the far future. We read touching tales about dementia and heartbreaking accounts of the deaths of children. We read a story narrated by an onion and another by the axe used to execute Thomas Cromwell. For some bizarre reason known only to a surprisingly large number of the 1,500 or so entrants, we read a disproportionately large number of stories about seagulls. Well, all right, not exactly about seagulls, but in which seagulls were to be seen or heard."

Nicholas introduces each of this year's stories in the running for the £10,000 prize:

Adam O'Riordan reflects on the process of choosing the Poetry finalists and on each of the short-listed portfolios: "Judges Sarah Howe and Helen Mort worked tirelessly looking through almost two thousand entries. The beauty of the prize is that each entry is looked at by a judge (we don't use sifters) which means when it came to forming the shortlist each judge had a link to poems we discussed. As ever this was a thrilling and a rigorous process in which we weighed the merits of each portfolio. As it should, in the end it came down to trying poems on our breath; the best defence of any poem was reading it aloud. The poems that made it to the shortlist seemed to live on the page and on the breath. There's a pleasingly wide range of themes and experiences on show; the concerns of a globalised world in which sensibilities and experiences collide. But in each of the shortlisted portfolios is a sensitivity to the music and rhythm of the English language and also the potential of poetry so see life in new ways; to delight, to disturb to make the reader think and feel.

"Eric Berlin's poems consider memory and nature in powerful and original ways. Dante Di Stefano offers poems which are both formally assured and darlingly inventive with a deep connection to literatures of the past. Sakinah Hofler offers intense, powerful and at times searingly raw poems reaching from Mecca to modern day America. Rebecca Tamás give us poems as monologued dream visions blurring internal and external experience to compelling effect. Ruth Tang's poems are clever and precise. They look at the intricacies and complexities of language with impressive results. Eoghan Wall's work has an impressive range, showing just how supple poetry can be from the biblical to the everyday."

Sarah Howe is a British poet, academic and editor. Born in Hong Kong to an English father and Chinese mother, she moved to England as a child. Her first book, Loop of Jade (Chatto & Windus, 2015), won the T.S. Eliot Prize and The Sunday Times / PFD Young Writer of the Year Award, and was shortlisted for the Forward Prize for Best First Collection. She has performed her work at festivals internationally and on BBC Radio 3 and 4. Having previously held fellowships at Cambridge University and Harvard's Radcliffe Institute, she is currently a Leverhulme Fellow at University College London.

Helen Mort was born in Sheffield. Her first collection Division Street was shortlisted for the Costa Prize and the T.S. Eliot Prize and, in 2014, won the Fenton Aldeburgh Prize. Her second collection No Map Could Show Them (Chatto & Windus) is a Poetry Book Society Recommendation. She is a keen runner and the author of Lake District Trail Running (Vertebrate) and has edited The Owl and the Pussycat, a poetry anthology for children. She joins the Manchester Writing School at Manchester Met as Lecturer in Creative Writing in September 2016.

Adam O'Riordan is Senior Lecturer in Creative Writing at Manchester Met and has chaired the Manchester Poetry Prize panel since 2012. In 2008, he became the Wordsworth Trust Centre for British Romanticism’s youngest ever poet-in-residence and his first collection, In the Flesh, won a 2011 Somerset Maugham Award. His debut collection of short stories The Burning Ground will be published by Bloomsbury in the UK and W.W. Norton & Company in the USA in 2017 and his second collection of poems A Herring Famine will be published by Chatto in 2017.

Janice Galloway is an internationally-acclaimed author of novels, short stories, poetry and non-fiction, collaborative works with sculptors, painters, musicians, typographers, photographers and videographers. She has won The American Academy of Arts and Letters EM Forster Award, Saltire Award, Creative Scotland Award and Scottish Book of the Year. She has been writer-in-residence to four Scottish prisons, Research Fellow to the British Library, resident at Jura Distillery, and was the first Fellow in Residence at the University of Otago in New Zealand. Her radio work includes two series for BBC (Life as a Man and Imagined Lives) and programmes on music and musicians.

Juliet Pickering joined the Blake Friedmann literary agency in 2013 and her authors have been shortlisted for Costa, Commonwealth and Guardian First Book Awards, won the Whitbread and Green Carnation Prizes and, in 2015, the prestigious French literary award, Prix Femina Etranger. Her interests range from literary, book club and well-written commercial fiction to crime and psychological suspense. She represents many non-fiction writers across the board, including memoir, pop culture, social history, feminist and political commentary, cookery and food writing, humour, and all sorts in-between. She was also a judge for the Bristol Short Story Prize 2016.

Nicholas Royle has chaired the judging panel for the Manchester Fiction Prize since 2009. He is Senior Lecturer in Creative Writing in the Manchester Writing School at Manchester Met and the author of seven novels, including The Director’s Cut, Antwerp and First Novel. He has written more than 100 short stories, some of which feature in his collection Mortality. He has edited 20 anthologies, including six volumes of Best British Short Stories, and runs Nightjar Press, which publishes new stories in chapbook format. He lives in Manchester.